A format for every goal!

The 10 km race is the perfect distance because it combines three essential criteria to have fun:

It is a distance that poses a sporting challenge. Running 10 kilometres is no piece of cake, you have to work for it.

It is a convivial distance. Sharing the experience with other runners boosts your motivation and helps you push your limits.

It is a family-friendly distance. You can run with your father, mother, brothers and sisters… fun for the entire family!

Whether you are a Sunday jogger or a fanatic, whatever your level, this distance is made for you. What is the difference between you and the other runners? Your objective. It might be to finish the race or improve your fastest time, but also to surprise Emily, who never stops boasting about her times, or get a closer look at Chris, who will be running in fluorescent colours when you normally see him in a suit and tie.

The half marathoners will start at the same time. Camaraderie and good humour guaranteed on this loop course.

The 10 km race of Run in Mont Saint-Michel by Harmonie Mutuelle is a quaint and bucolic experience! 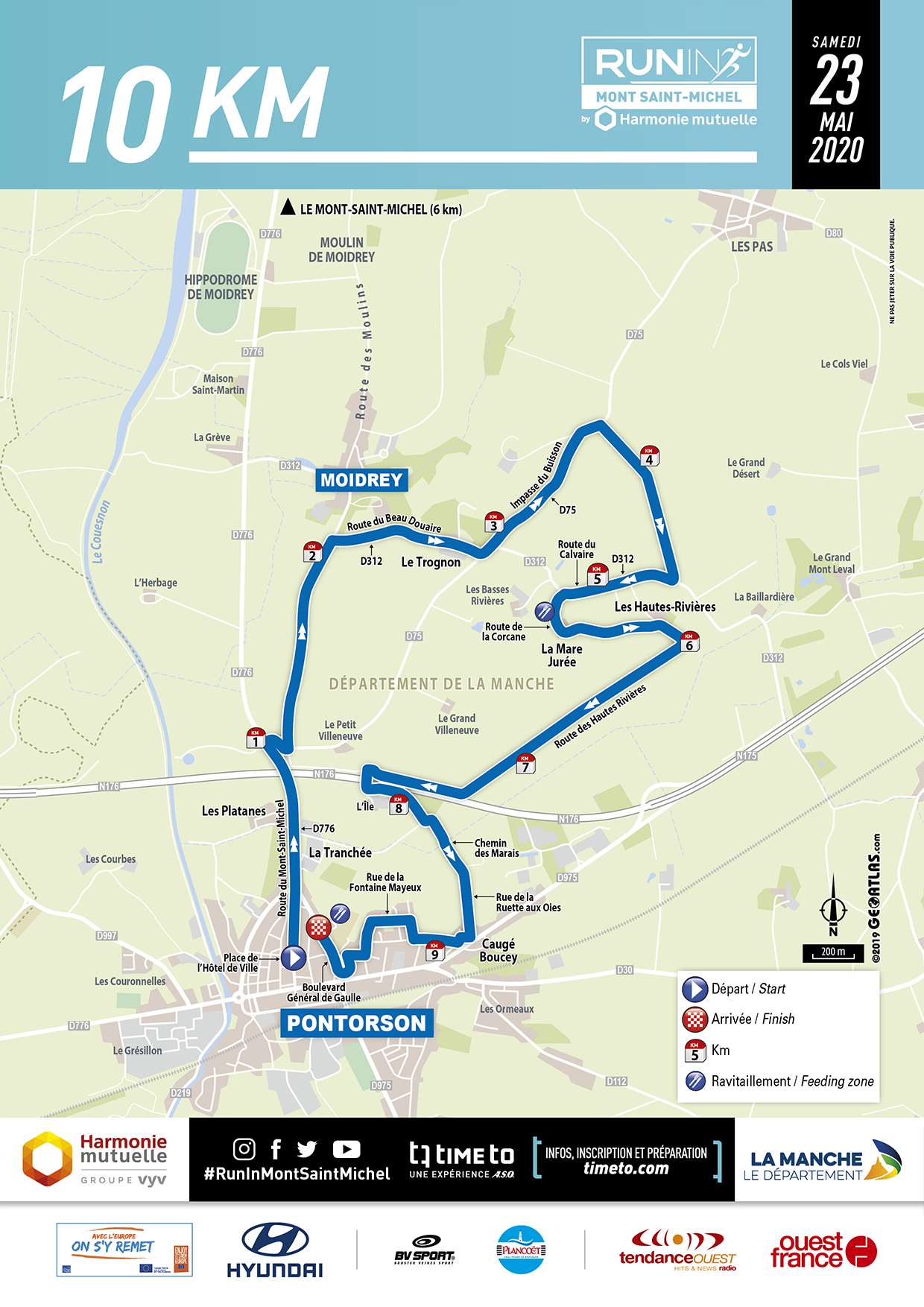 The most popular running format, a race which is open to everyone, from beginners to competitors.

Don’t you feel ready to run a marathon yet? You’ll probably be on the roadside the next day to support a friend marathon runner, the Semi Marathon will be your challenge!

The race starts in the centre of Pontorson, with a very enjoyable and rather fast course through the farmlands offering fantastic view of the windmills…. The finish is also in the heart of Pontorson.

Do you want to beat your record? The race conditions (the starting areas, route layout) will allow you to your improve your performance. 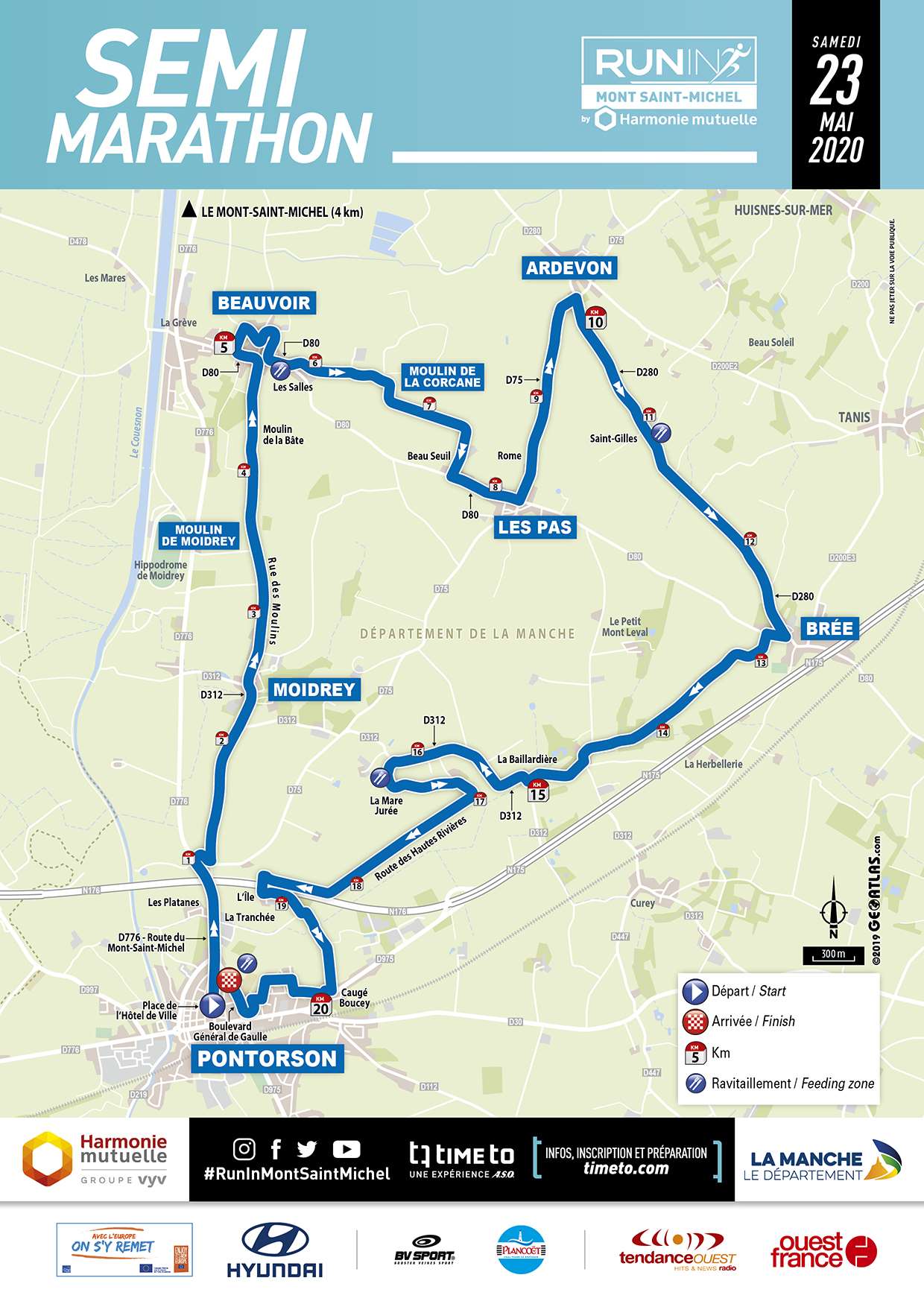 Combining a sporting challenge and a fun event, the Duo Marathon is a very popular and accessible format which enables two runners to complete the Marathon route in relay.

If you are the first runner in your relay team, you will get off to an unforgettable start, crossing the line with 3,200 other marathon runners.
You will then hand over to your team mate in Cherrueix at the 20.5k mark, where you will receive your medal, a T-shirt and refreshments. You can then go to the finish line either using the free shuttle buses which will be running from near the handover area or make your own way there.

If you are the second runner in your relay team, you will finish opposite Mont Saint-Michel, buyed by the thousands of spectators who line the last few kilometres. Free shuttle buses will take you to Cherrueix from the start in Cancale on the Sunday morning. There will be a left luggage area for your bags at the relay zone. 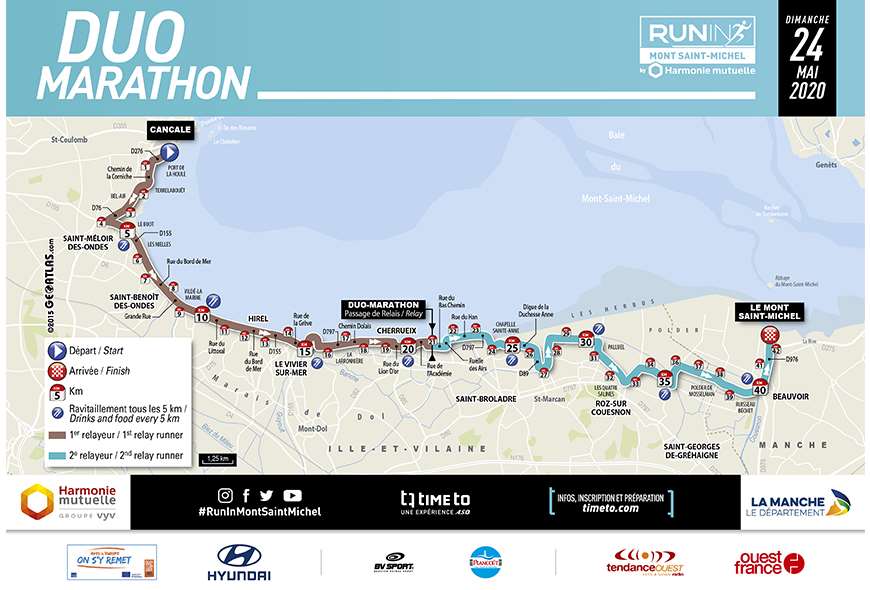 Frequently ranked among the 10 most beautiful marathons in the world, the Marathon de la Baie du Mont Saint-Michel will allow you to discover a jewel of French cultural heritage.

The idea of a route running along the Bay and finishing at the foot of the Abbey of Mont Saint-Michel was an obvious choice for a group of friends who belonged to the Lions Club in Saint-Malo and imagined the concept. This unique route has been a wonderful challenge for thousands of runners since 1998.

With the majestic Mont Saint-Michel as a backdrop, the Marathon du Mont Saint-Michel is one of the only marathons is the world where you can see the historical finish-line even before embarking on the legendary 42,195km distance.

The Marathon is the mythical distance and that of the Bay of Mont Saint-Michel is renowned for its rolling route.

It is a dream for a very large number of runners, one that certain among them have already had the pleasure of fulfilling, be it in Paris or elsewhere. This Marathon is not only a sporting challenge. It is also really a tourist visit, a chance for an unforgettable weekend.

We offer you and those accompanying you an ideal touristic route that is perfectly adapted to the Marathon. Besides facilitating your accommodation booking, we will also offer you the opportunity to cross the bay, either the night before or the day after the race, to visit the millenary abbey at a reduced rate or take other tourist excursions in this beautiful French region. 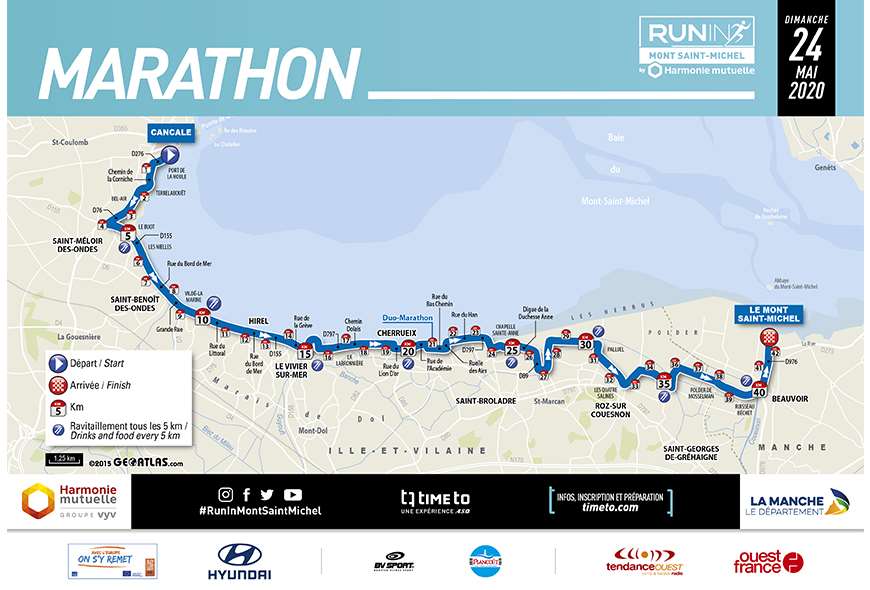 The Run In Mont-Saint-Michel by Harmonie Mutuelle takes place in an exceptional natural setting, offering both agricultural and maritime zones and fauna and flora conservation areas.

For us it was obvious to offer a race format which is as close as possible to this natural environment: running along next to the beach grass, near the shore, in the middle of the salt meadow lambs, along the See and Sélune estuaries, on the Pointe du Grouin Sud...a coastline with a wealth of resources.

The trail will cover 53 km and will be situated on the Norman side of the Bay. The route is currently being created; it will take runners from Granville to the top of the Abbey of Mont Saint-Michel.

This trail, which is of average technical difficulty and has few elevation gains and losses, is for all prepared runners who favour their running environment and magical landscapes.

The Archangel Michel, the golden statue which crowns the Abbey and is visible dozen of kilometres away, will be a focal point for runners. When they cross the finish line marked out at the top of the Abbey, they will celebrate their exceptional achievement.

The start will be in Saint-Pair-Sur-Mer and the finish will take participants right up in the heart of the Mont Saint-Michel.

The route is extremely diverse both in terms of terrain and elevation profile so there’s something to please all trail runners. Here’s what it looks like:

The first part (up to kilometre 14), follows an initial section along the Granville coast, before taking runners around the paths and tracks of St-Pair-sur-Mer & Kairon and up above the town of Julouville and its coastline. This first section is a series of regular climbs and descents that should be approached with care, given the number of kilometres that follow.

A second section (to kilometre 30) provides great views and plenty to get those legs going: after the 1st feeding station, runners follow the coastal path along the fabulous Carolles & Champeaux cliffs, with steep technical trails and a short incursion inland leading to the 2nd feeding station in Saint Jean-Le-Thomas. The runners then head along the beach to the 3rd feeding station in Genêts.

This is the start of a long section taking the trail runners along the Sentier du Littoral (coastal path), with breath-taking views of Mont-Saint-Michel, to the feeding station at Vains Racecourse. Runners then enjoy a refreshing crossing of the River Sée, followed a few kilometres further on by the River Sélune, at kilometre 45.

To finish off, runners head towards Mont-Saint-Michel across the salt meadows of the Bay, an opportunity for those who still have the leg power to break into a trot and see Mont Saint-Michel loom rapidly into view. The Archangel Michel, the golden statue which crowns the Abbey is visible and will be a focal point for runners. When they cross the finish line marked out at the top of the Abbey, they will celebrate their exceptional achievement.

In total, you’ll have to tackle 53 km and more than 800 m of elevation gains. 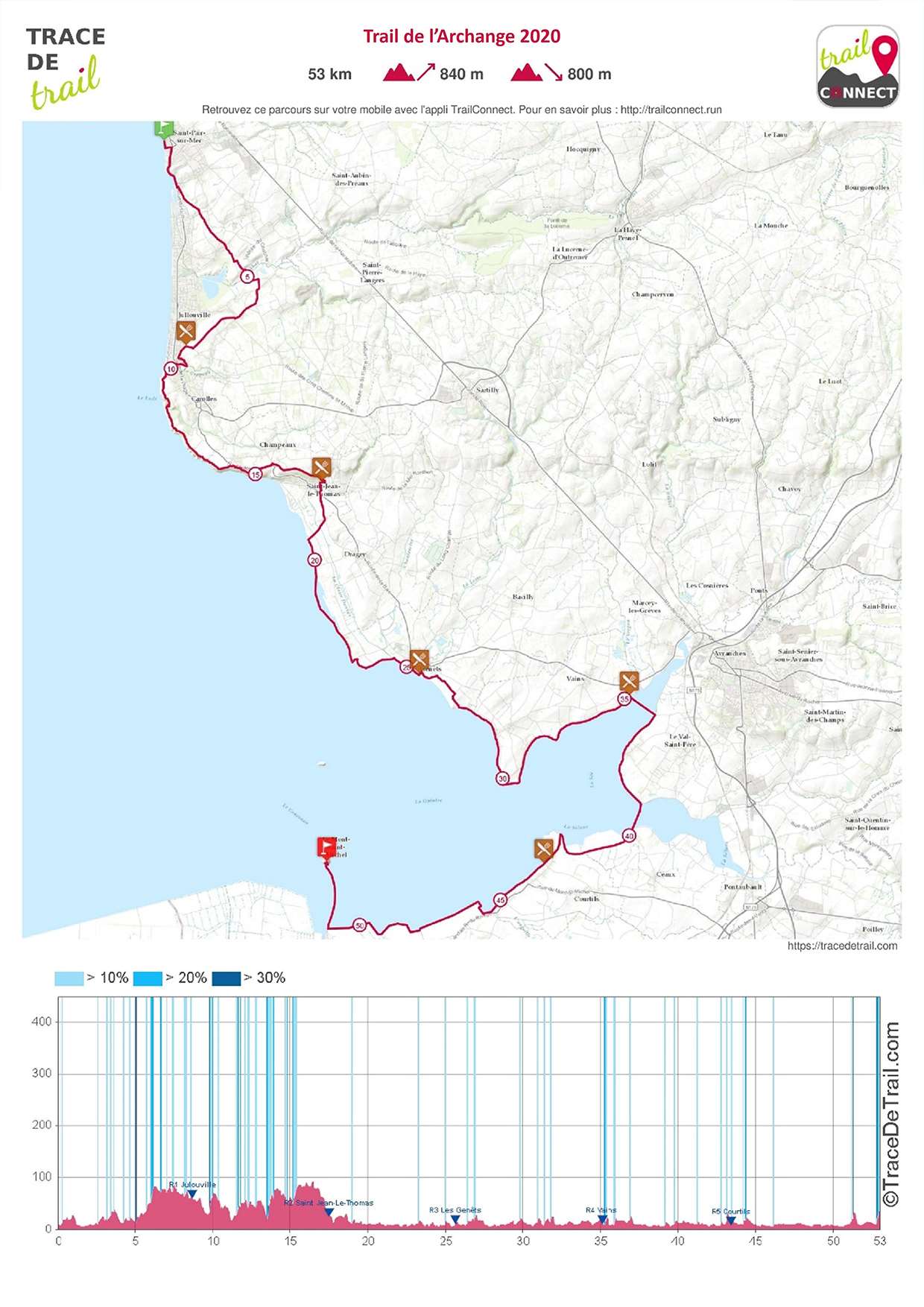 Is your child 5 to 10 years old? If so, then (s)he can run like the grown-ups and enjoy a family-friendly celebration of running! Come to the Pitch Marathoon's on the eve of the race!

SO WHAT IS THE PITCH MARATHOON'S ANYWAY?

It is a couple of small races for children held over distances of about 0.8, 1,2km and 1.6 km. It goes without saying that the course, located in the centre of Pontorson, is properly marked and secured.

To the delight of our aspiring runners, there will be a Village with a wide range of activities including music, warm-up, etc. They will also be rewarded with a medal and a hearty snack at the finish! For their families, the Pitch Marathoon's is a unique opportunity to pass on sporting values in an experience for the entire family.

IMPORTANT: No medical certificate is needed to take part in the Pitch Marathoon's! On the other hand, you can already print and fill in the parental consent form you will have to present to retrieve your child's race number. If you happen to forget it, parental consent forms will also be available on the big day.

Prices of Run In Mont Saint-Michel by Harmonie Mutuelle 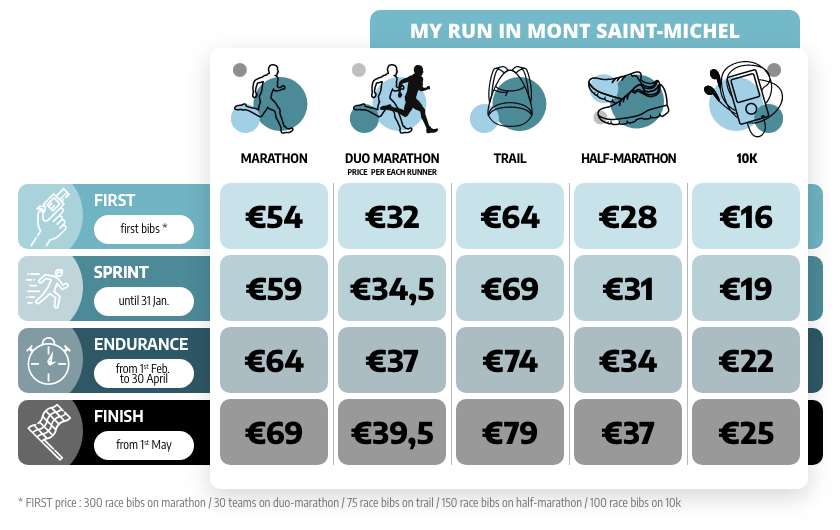